5.30 Alarm call today.  Mixed reactions on the camping with reports of overnight sicknesses (not from the hospice crew), periodic and sporadic sleeping and general feeling of dizziness and light headiness.   Porridge and toast for breakfast .  We pack our gear, again not an easy task at altitude and head off at 7.30.

Today's trek was over 7 and a half hours. We started out, up a shale pathway and a very steep climb and reached a summit of 4500m with incredible views across lake huillquicocha.

Some massive relief after a very tough ascent and a great feeling elation and achievement marked by an excellent group photograph over the  lake.  The event was suitably marked as a magnificent condor flew overhead.

One of the downsides of reaching a summit is that you then need to climb down.  The tricky and very slippery descent was arduous in places and almost everyone had a few scares along the way.

We had a very impromptu photocall at a beautiful waterfall that dropped down over 100feet.  We also had a very close encounter with a pack shave of local sheep dogs which seemed to be over exuberant in guarding their territory.

Today's camp-site is in another local community slightly larger than the last and  as usual we are welcomed by the local woman and children trying the sell us their homemade wares comprising of hats, scarves and various knitted animals.

Dinner tonight was soup, chicken and rice followed by chocolate cake. Then lights off again at 9.30 as we have a 5.30 start and 8 hours trekking tomorrow.

And so we begin

Early start as we are getting minibuses to the sacred valley where we start our trek.  It is very hard to explain how the reduced oxygen affects everyone and even the simple tasks are very difficult.  The Sacred Valley is up even higher then the 3500metres of Cusco, approximately 4 times the height of Goatfell, and it is not long before we have a bus load of  headaches and dizziness.  An ideal way to stat a long day!

We have a brief warm up then head off up the hills.  Maximum height today was 4200m.  The terrain was very rough and very desolate in places. Bizarrely there would be random woman or even children sitting in the middle of some very rough landscape spinning there llama or sheepskin wool.

The Peruvians are a very friendless and colourful race.  They are always eager to come up and have a nosey, to say hello or to sell you here wares.  The woman and children usually wear traditional handmade clothing very vibrant in primary colours (if thy were clean).

The walk took us through some stunning scenery and we ended up in the small holding of a local farmer for lunch.   There were in excess of 20 children running around, birth control is unknown over here and the nights are cold.  The children were very friendly and excited and were eager to see what they could coerce out of us.  Aileen opened a packet of dried fruits and was promptly 'mugged' by them all. We were discouraged from giving them sweets as brushing teeth and basic dental hygiene is very poor.  We had stopped off at a local market before the trek and stocked up on pens, paper and small toys.  Graham gifted some pens and paper to some of the kids.  There were few men around as we walked as they were grafting away high in the hills.

After lunch we continued heading to our first campsite on the football pitch of a local community.  The 'community' consisted of a few houses, a football pitch and a small painted building which was the school.

Dinner was soup and fish and banana sweet then in tents for a 9.30 curfew.

Today we had an acclimatisation walk to sacqwayman pronounced "sexy women". Aileen, Ellen and Carol are convinced that it was named after them.

Everyone in the group found the steep climb very tough, it is hard to explain how the difference in altitude affects your breathing and makes even a simple exercise that more difficult.

At 3700 metres we stopped at Christo Blanco which had an enormous statue of Jesus which was a replica of the same statue that overlooks rio de Janeiro.

At Q'enco (sounds like the coffee), an authentic inca site we explored the ancient ruins which involved squeezing through an Indiana jones labyrinth which was guarded by an puma statue which was worshipped by the icans.

There was a very sacred sacrificial altar which is revered by the incas. We were all extremely embarrassed when Ellen insisted on prostrating herself to the gods (or anyone else that was interested) before being promptly chastised by our guide.

We then moved on to visit some Incan caves and arena like worshiping ground. We all had to make our way through a pitch black tunnel which was carved out in the rocks and used as an escape tunnel for the icans. Rumour is that it leads back to cusco town. It was very claustrophobic experience however Graeme heroically volunteered to take the lead through the very narrow passage only to blot his copybook bu crying out "Aileen, i cant do it" and insisting on putting on his head torch...... Woose.

Carole exited the tunnel with two hand prints on her bum, Graham insists that he was only trying to find the light at the end of the tunnel.

Carole and Graeme was brave enough to slide down the rock luge.

We had a good photo opportunity at the the sacqwayman fortress ruins Which dated back to the 1600's before we headd back to Cusco town for a late (very late) but well earned lunch.

Ellen decided not to join our small Ayrshire group for lunch, she was spending some time working on getting to know our fellow travellers, coincidentally Simon, who is single was also in this group.

Hopefully we will get a good nights sleep tonight as we start the trek tomorrow.
Posted by The Trekkers! at 11:48 pm 16 comments:

Finally after 4 flights and 39 hours, we have arrived in Cusco

The Peruvians obviously recognise influential people as Chris and Aileen were both bumped up to business class for the last short flight. I should probably explain that the only difference from cattle class and business is a dirty curtain (and you sit slightly further away from the hens)

The thin altitude is immediately obvious to everyone as we get off the plane and make our way to collect the bags. Everyone is reporting signs of dizziness and even short walks seem that little bit harder.

A quick minibus ride to our hotel base for briefing and lunch. Alpaca all round (Lima) with rice AND chips, they like their carbs in Peru!, before Simon takes us on a tour around Cusco.

The Incan heritage is very prominent throughout the town and there are churches on every street corner. We spent some time at the local indoor market, a vast area with traders selling everything including spices, fish, meat, hats and locally made souvenirs (and other general tat).

Had to pay a visit to the public toilets, an experience not to be repeated.

Chris and Graeme both struggling this afternoon, a combination of long travelling, lack of sleep and high altitude.

Had a long wait at Heathrow, special thanks to Aileen's hubby Gordon who met us in departures and brought us a few drinks (little does he know how much Aileen spent when he left!)

Met up with the rest of the Action Challenge squad, 15 people in total including Simon the trekking leader, same guy we used in Kili.

Arrived in Lima after one of the most horrendous flights ever. Iberia are not my chosen airline from here on in! Pictures on the inflight meal can be seen on the blog suffice to say I was offered either pasta or burger and I am not sure which one I actually got!

Graeme spent most of the flight with his legs wrapped around his neck. He removed his boots for more comfort only to be introduced to Peruvian urine when he went to the loo. Soaking socks. 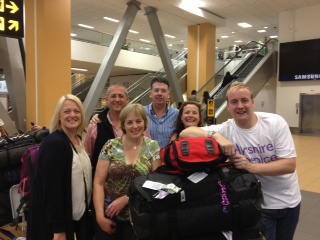 (Another flight over. And despite the wet socks, Graeme is still sporting the same t-shirt he was pictured in yesterday.)


Aileen had a very memorable flight. The Steward took a real fancy to Aileen's new very expensive watch (£15) remarking "I like your colourful cock!". Obviously he didn't overhear Aileen when she was telling everyone that she got a bush (hair) cut every 6 weeks.

Ellen thought that she was in with a real chance with the steward however it turns out the he only had eyes for our Graeme. However Ellen didn't miss out. When we arrived in Lima, she was singled out for 'personal' frisking at security. Rubber gloves will never feel the same again.

Couple of hours wait now before we board the 4rd flight, to Cusco. Numerous debates about what time it is both here and at home.

PS - To learn how to add comments to our blog postings click here. Its simple, just type your comment and where is says "select profile", select Anonymous or Name/Url.

It's Day One and we've arrived at Glasgow Airport. It's a long day's travelling just to get to Madrid.

Finger's crossed all goes well. We'll do our best to keep you all up to speed with the trip but that depends on how good the mobile signal is on the remote hills of Peru. And Chris being able to use a computer. 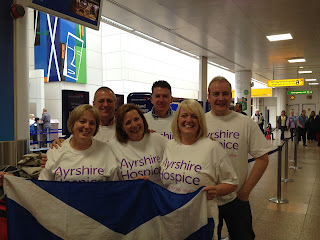 Please feel free to leave messages and comments across the blog, everything that can help us on our trip is very valued.
Posted by The Trekkers! at 9:00 am 8 comments:

Our latest challenge in aid of the Ayrshire Hospice is underway, this time we're off to South America.

Follow online as we trek to Machu Picchu (the Inca Trail) in late August. This time round our challenge features 6 trekkers, you can learn about each of us here.

We all greatly value your continued support and generosity. Links to sponsor each of us are available below - your support makes a huge difference at the Hospice.